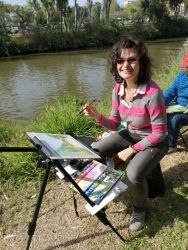 Olga Shefranov is an Ukraine-born based in Israel artist.
Her works present in private collections of over the world, including United States, Germany, United Kingdom, Australia.
She liked to draw since she was a child. She drew everything and everywhere especially drawing in a Zoo which became her favorite place to draw. During her life she changed 5 specialties. She studied physics formany years, having reached the doctorate at Bar Ilan University.She was lucky to work as an aerobics trainer and gym trainer. In 2003 and 2004, she took 2nd place in Miss Israel competitions. For several years she worked as a programmer.
After finishing Israel Animation College in Tel-Aviv since 2010 till 2017 Olga had been
working as a Game Designer. Since 2017 she works as a full-time self-employed artist, designer, and illustrator.
Today Olga is a watercolor artist. During the years Olga participated in a variety of painting
and illustration courses and learned from several well-known artists and illustrators.
Currently she based in Israel and find inspiration all around.
Next
Previous